The Sakurai family are said to be descended from Ban Dan'emon, a celebrated historical military commander. They began their involvement in tatara iron production after moving to the inner Izumo region around 1644. The current head of the family is the thirteenth of his line.
The Sakurai were one of the “Five Ironworks” permitted to produce iron by Matsue domain and the iron they produced was impressed with a stamp reading “Kikuichi.” Iron bearing the Kikuichi stamp was considered the best for manufacturing firearms, and was indeed used for this purpose by the shogunate.

The Kabeya Shūseikan showcases the history of tatara iron production with exhibits of implements and old documents that have been handed down through the family, as well as over 4,500 artistic works collected over the generations, in many cases presents to the family from the writers and artists who spent time with them. “Kabeya” is the trading name of the Sakurai family.
Built in 1738, the surviving main hall has been designated an Important Cultural Property. The garden, which was laid out in 1803 to welcome the lord of the domain, Matsudaira Harusato (also known as Lord Fumai), features an artificial fifteen-meter high waterfall to which Lord Fumai gave the name “Iwanami” (“Cliff-wave”). In addition, the Kikusō-tei tea house (“The Pavilion of Sweeping and Scooping up [Virtue]”), built from a design by the Nanga-style painter Tanomura Chokunyū in the early Meiji period, can still be found in a corner of the garden. A lush valley stretches along the south side of the grounds, which, along with the garden itself, has earned a reputation as a popular site for taking in the colors of the autumn leaves.

address
1655, Kamiai, Okuizumo-cho, Nita-gun, Shimane Japan 699-1621[See Google Map]
opening hours
9:00 am -4:30 pm, closed on Monday and from mid-December to mid-March.*If a national holiday falls on a Monday the museum remains open and closes the next day.
website
http://kabeya-syuseikan.com 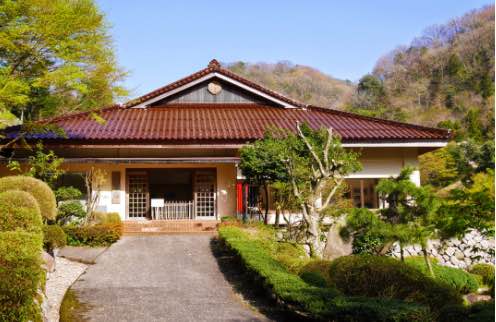